Sue has always been a dog person, but for most of her life, her dogs were exclusively companion animals. They learned to do a few tricks to earn treats, but their primary role in life was to cuddle up on the couch (or under the covers!) and give lots of love and kisses.

This all changed when Biscuit and Blackie adopted Sue at the West LA Animal Shelter in 2011. Not long after, Blackie explained that she loved jumping over, running through and climbing on obstacles and really wanted to become an agility dog. Accordingly, she asked to be enrolled in agility classes. Then, Biscuit heard about nose work classes, and asked if she couldn’t try that sport. Of course, as the girls discussed their respective classes, they agreed that they’d each like to try the other’s chosen sport, and “The Bs’ Team” was born.

Both Nose Work and Agility have been especially important for Blackie, who as a young dog was extremely reactive, to both other dogs and to humans. Although she spent her first 12 weeks of agility classes very fearful of her classmates, and barking at them almost constantly, as she became more experienced and confident, she has also grown less fearful.

Blackie and Biscuit have both competed in CPE Agility, earning their C-ATCH and C-ATE titles. In addition, Blackie competed at the CPE National Agility Trials in 2014, 2015, 2016, and 2017, and has qualified to compete again in 2018. Biscuit accompanied Blackie and competed at CPE Nationals in 2015, 2016, and 2017. Both girls have also earned their Canine Good Citizen.In Nose Work, the Bs have trained regularly with Elisha Stynchula, Jo Trent, and Kim Buchanan. They have also attended workshops and seminars with Ron Gaunt, Jill Marie O’Brien, Barbara Schwerdt, and Roxanne Baudryraph here. 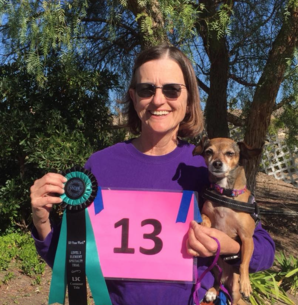 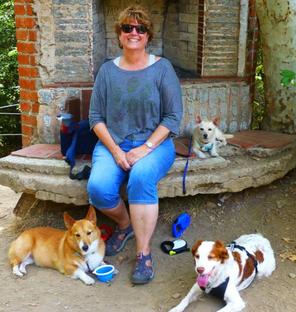