​Betsy’s nosework journey began in 2011 when she adopted Rhys, a Pembroke Corgi.  By pure luck, she signed up for a class conducted by Chris and Laura Busch, a class she still attends. Betsy has been privileged to work with three dogs to date:  Rhys, Pooka (terrier mix) and Binne (black and grey mix).   Like Ann, Betsy enjoys working different instructors, including Amy Herot, Jo Trent, Barbara Schwerdt, Jill Marie O’Brien and, of course, Chris and Laura Busch.  She has been lucky enough to attend three west coast Nosework Camps, taking either Rhys or Binne.  Between the 3 dogs, Betsy has earned many element titles, NW1, NW2 and NW3 and earned her first Elite title in 2022. 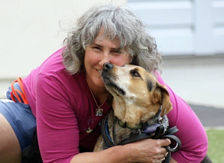 Julie grew up with cats, and only started living with a dog in 2001.  She and her husband rescued a Shiba Inu/Shepard mix puppy and were scheduled to take this puppy to the vet for its first examination on September 11th, 2001.  Needless to say, the puppy went to the vet on September 12th, 2001.   Sasha was a calm, smart, athletic dog with a wonderful, easy-going disposition.  Julie thought all dogs would be like Sasha.  In 2011, she and her husband decided to get a second dog that would primarily be taken care of by Julie.  This dog is Amber, a rescue, adopted into the family at 8 months old.  Amber is an energetic, extremely smart and athletic Australian Cattle Dog/Foxhound mix.  A true “wild child”, Julie had to find more to do with her than hiking and walking.  This dog needed a mental challenge.  Kristin Fertschneider, a good friend who also happens to be a dog trainer, suggested nose work.  It took a year to finally sign up, but Julie did so in January of 2013, and started this journey with Penny Scott-Fox.   Since then, Julie and Amber have been lucky enough to train with Ramona Audette, Barbara Schwerdt, Kim Buchanan, Jo Trent, Vicky Lovejoy and Amy Herot, and when they’re not hiking or walking or driving, can be found doing nose work…something they are both passionate about. She and Amber have achieved the following titles:

Ann was involved in nose work trialing her German Shepherd Dog, Valor, beginning in 2010.  Valor was raised as a puppy-in-training for Guide Dogs of America but when she was "career-changed," the career became nose work.

Ann believed you couldn't have too many instructors because they all contribute different approaches and insights to nose work.  Among the many instructors that Ann worked with were Ramona Audette, Amy Herot, Jeff McMahon and Barbara Schwerdt.  She and Valor achieved the following titles: